Deep learning: what it is and where to find it 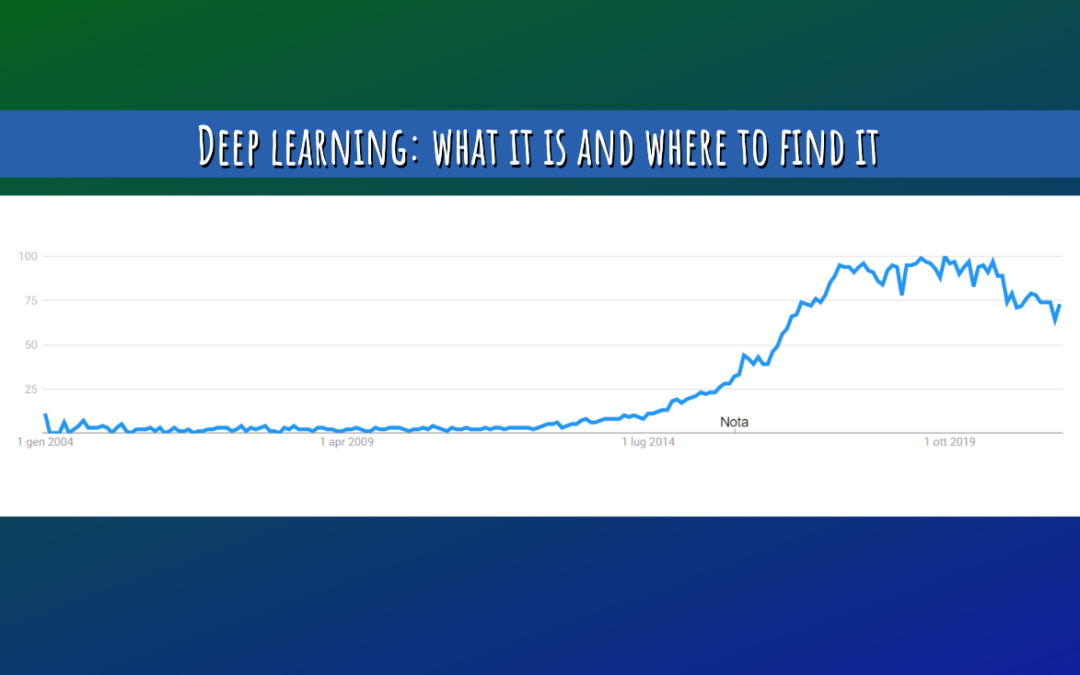 In recent years, deep learning has captured the attention of scholars, researchers and media.

The search trend graph in Google for the terms “deep learning” over the last 17 years is indicative.

There is a reason that explains this rise in interest in this topic, but before we focus on that, let’s try to explain what deep learning is precisely.

What is deep learning

Often the terms deep learning, machine learning and artificial intelligence are misused, almost as if they were interchangeable.

In reality, these are completely different concepts, but somehow related to each other.

Deep learning is one of the methods of machine learning, through which it is possible to create what is called Artificial Intelligence.

The above mentioned can be defined as any technique that allows computers to mimic human intelligence, using logic, if-then rules, decision trees and machine learning.

Thus, Artificial Intelligence constitutes the ultimate goal with machine learning being the road to achieve this goal. This road involves the ability of machines to acquire data (lots of it) and learn automatically from it, through training models that allow to modify and adapt algorithms in accordance with the available information.

Machine learning includes abstract statistical techniques that allow machines to improve tasks through experience. There are several approaches to implement machine learning: one of them is deep learning.

Deep learning is thus a kind of subset of machine learning composed of algorithms that allow software to train itself to perform tasks (e.g., speech or image recognition) by exposing multilayered neural networks to a large amount of data. 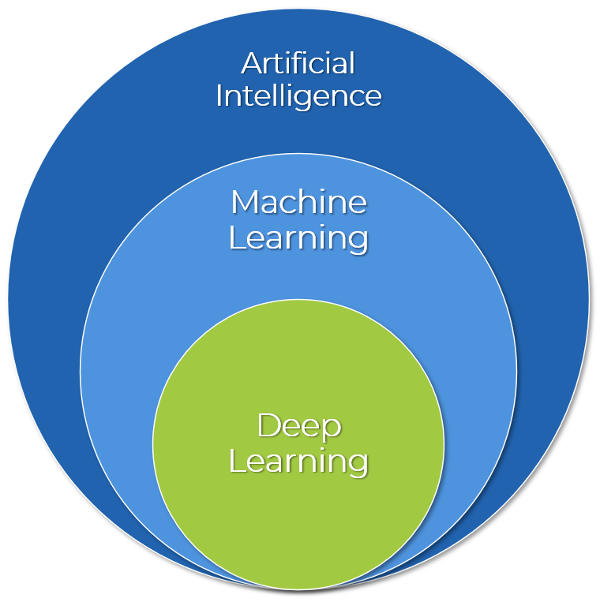 As an example of another approach, we can cite Bayesian networks, which NeXT has used in the past for an AI algorithm dedicated to resolute quality problems during the manufacturing process.

Deep Learning takes advantage of architectures and mathematical models that go by the name of multilayer neural networks. These networks provide a large amount (we speak of tens to millions) of levels (or layers) of artificial neurons involved: that’s why we make use of the term “deep”. The goal of this system of neurons is to try to replicate the functioning of the human brain.

If Deep learning were a dish, we could try to provide the recipe to make it at its best.

Let’s try to do just that, also trying to understand why right now deep learning is exploding, both in the general interest, as can be seen from the image at the beginning of the article, and in the interest of the labor market, as evidenced by the multiplication of dedicated university courses (engineering, but also economic, social and humanistic subjects), which were born in recent times.

For several years, starting with what we all call Industry 4.0, i.e., the fourth industrial revolution, we have been hearing about Big data. We could say that it is effectively the data revolution. Data is of central importance today, also thanks to another enabler such as the Internet of Things, which has been instrumental in creating a connected and digital ecosystem, both in the everyday context of our lives and in the industrial context of factories.

It’s getting easier and easier to find data and make it flow: the amount of data is crucial, indeed necessary, to successfully exploit a deep learning model.

So the first step is to have an effective and efficient data acquisition system.

The algorithms of automatic learning serve to train the models using the great mass of data of which we have spoken in the previous paragraph.

The main difference between deep learning and a traditional algorithm is that the behavior of the latter is established by the programmer, who also provides the data (quantitatively limited) to be used: in a deep learning model, however, the algorithm learns (trains) from the data (in large quantities) on what kind of behavior to follow.

These algorithms can be written by using traditional programming languages such as C++, Python, Java, Javascript etc.: the theory and algorithms already existed for thirty years, but only after 2012 deep learning actually took off thanks to small but crucial improvements in the algorithm that allowed the use of multilayer neural networks (neural networks, previously, were still quite superficial, with only one or two layers of representation).

Other improvements that occurred between 2014 and 2016, now allow training to be performed from base models that have a depth of thousands of layers.

For this to happen, however, the third ingredient is required.

The success of a good pizza depends on the temperature at which it can be cooked. For this reason, it would be difficult at home to make a pizza like in a pizzeria: the electric oven reaches a maximum of 250 °C, while the wood-fired oven reaches up to 400 °C.

So, in order to use Deep learning models, it must be possible to use a lot of computing power and memory (storage).

This element, in the past, has been a restraining element for the development of Artificial Intelligence. Today the power of computers allows the use of deep learning models, so much so that we, perhaps not always consciously, use artificial intelligence on a daily basis.

Let’s take a concrete example. In the field of natural language processing, we have made great steps, but the algorithms are more or less the same: there has been rather a great advancement of technology in the world of hardware and the ability to store data in the cloud.

The crucial factor has been the ability to use graphics processors (GPUs) in parallel with the CPU. This allowed to make computationally intensive operations.

It is clear that the most ambitious results will occur when, for example, even more powerful computers, such as so-called quantum computers, will be built.

To date, the capacity of a deep learning neural network is limited to a very specific goal: if it has to recognize a human face, it cannot be used to recognize the face of another species.

Basically, each artificial neuron responds to input data (synapses) with a “0” or a “1”. Based on this value received from the previous neuron, the synapse sends or keeps a signal to the neurons of the next layer, in charge to process the data they have received and transfer the output to the cells of the next layer.

The research is going in the direction of mimicking as much as possible the functioning of a human neuron, which is something more complex than the neuron of a deep learning network: it is not a single entity, but each neuron consists of a complex system of branches, with multiple sub-regions. The consequences are very interesting, because in this way the neuron could be considered as a sub-network, with all the implications that this entails. 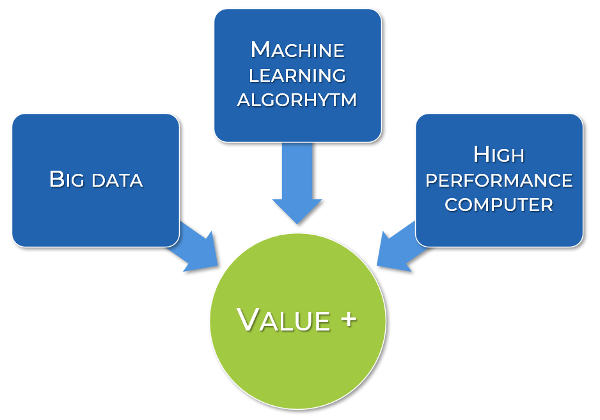 The funnel of value

We may not be aware of that, but we use artificial intelligence every day.

When we let the navigator guide us in our travels, when we do a Google search, when we shop online or interact with a smart voice assistant, we are using artificial intelligence.

Wanting to list some areas where deep learning is being used today, we can mention for example:

The use of deep learning in the industrial world

In the industrial world, Big data and the Internet of Things have been fairly familiar concepts for several years. These two topics have always been listed among the enabling technologies for Industry 4.0.

The digitization process that many companies in this sector have been undertaking for some time is creating an ideal ecosystem ready for the exploitation of deep learning models.

Artificial Intelligence is absolutely synergistic with the concept of Internet of Things, so much so that it is not wrong to think of these two themes in the same way as we approach the brain (AI) and the body (IoT).

In the “Industry 4.0” era, the concept of Internet of Things has become an integral part of any production process. We are surrounded by “smart” devices that can communicate with each other, in the plant and between plants, in a hyper-connected environment: PLCs, sensors, servers, wearable devices.

The uses where deep learning brings a greater added value see the implementation of models for predictive maintenance, to greatly improve the efficiency of the production process, guiding the decision-making process of managers.

You may want to use something even quicker, in that case, follow us on Telegram!

<- What it means to digitize processes: Pt.6

We use cookies on our website to give you the most relevant experience by remembering your preferences and repeat visits. By clicking “Accept All”, you consent to the use of ALL the cookies. However, you may visit "Cookie Settings" to provide a controlled consent.
Cookie SettingsAccept All
Manage consent

This website uses cookies to improve your experience while you navigate through the website. Out of these, the cookies that are categorized as necessary are stored on your browser as they are essential for the working of basic functionalities of the website. We also use third-party cookies that help us analyze and understand how you use this website. These cookies will be stored in your browser only with your consent. You also have the option to opt-out of these cookies. But opting out of some of these cookies may affect your browsing experience.
Necessary Always Enabled
Necessary cookies are absolutely essential for the website to function properly. These cookies ensure basic functionalities and security features of the website, anonymously.
Functional
Functional cookies help to perform certain functionalities like sharing the content of the website on social media platforms, collect feedbacks, and other third-party features.
Performance
Performance cookies are used to understand and analyze the key performance indexes of the website which helps in delivering a better user experience for the visitors.
Analytics
Analytical cookies are used to understand how visitors interact with the website. These cookies help provide information on metrics the number of visitors, bounce rate, traffic source, etc.
Advertisement
Advertisement cookies are used to provide visitors with relevant ads and marketing campaigns. These cookies track visitors across websites and collect information to provide customized ads.
Others
Other uncategorized cookies are those that are being analyzed and have not been classified into a category as yet.
SAVE & ACCEPT

Creation of “ProLED“, software for the design and mechanical calculation for medium and low-voltage power lines.

These activities are designed for all the Franke Group’s plants in the world.